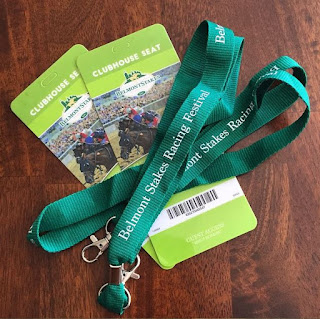 By now you know that the creators of Best Bet Design are horse fans... and horse racing fans. I was really excited to get tickets to go to the Belmont Stakes on June 6. (Unfortunately Anne couldn't make it, but my husband was willing to take her ticket.)

American Pharoah seemed like a great horse, winning the Kentucky Derby and then easily taking the Preakness Stakes on a sloppy track. His stride seems so effortless. If any horse in recent years could win the Triple Crown, it would be American Pharoah!

So after the Preakness, when I discovered that reasonably priced tickets (other than general admission) were sold out on Ticketmaster, I went to StubHub and paid a ridiculous amount for a pair of clubhouse seats. I thought, "He'd better win!" Good thing he did.

I started Belmont week off by painting my nails in the colors of Zayat Stables' jockey silks. The dots didn't come out the greatest, but it's the thought that count, right? And I did get some compliments on them at work. 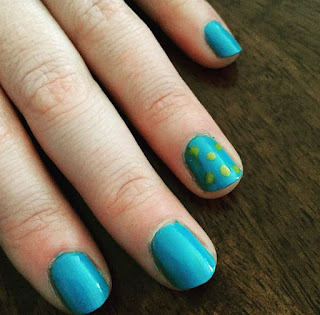 The drive down to Elmont took about 3.5 hours. We took the Taconic State Parkway to avoid having to cross the Hudson River near the city so for the most part we avoided sitting in traffic. Parking was easy since we had a prepaid pass. Then we began the walk to the track! Security was also easy, although there was a fairly long line. We finally got onto the track at 12:30, so we'd already missed the first few races. I did catch the call of Competitive Edge's race where he disappointingly finished last. Glad I was a little late and unable to bet on that one!

First things first after we arrived... I had to purchase a number of souvenirs. Programs were a must, along with Belmont drinking glasses and a hat. Sadly, no American Pharoah merchandise was being sold on the track, other than a poster. 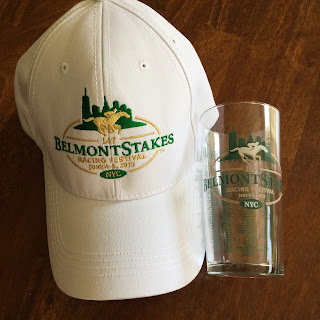 Also must-buys? $2 win tickets on American Pharoah. Lots of friends and family requested I pick these up for them, and I bet they're glad they did! I read a statistic that 90% of the win tickets for the Belmont were not cashed, and it's unlikely that they will be. Makes sense, a $1.50 profit vs. the keepsake of a lifetime. 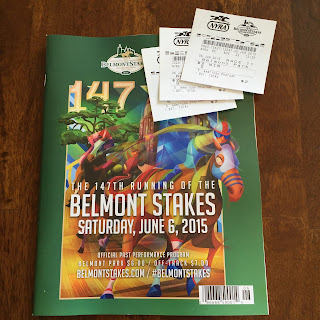 Eventually we got something to eat. I will say that NYRA has stepped up its game in terms of food options. When we went to the Belmont in 2012 there was only one place where you could eat with about four choices. It was nice to have a few options this time, especially since it was crowded.

Our seats were not the greatest in section BU, but we could see everything except the final turn and it was nice to see the horses coming at us toward the finish line. The entire day of racing was great. It was reassuring to watch Victor Espinoza ride to a third place finish in the Brooklyn Handicap, a race that happened to be a mile and a half long, just like the Belmont. I think that helped him get a feel for the track and how he needed to handle the first turn of the race. 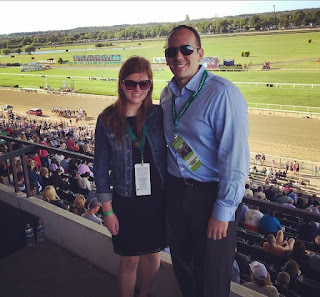 The high point for me (apart from the Belmont, of course!) was Curlina's win. I am a huge Curlin fan and witnessed him winning the Jockey Club Gold Cup to become the richest horse in racing, with more than $10 million in earnings. So it was nice to see his daughter win a very competitive race!

Finally it was time for the big race. This was my second time attending the Belmont Stakes and I will say that watching the horses parade onto the track to Frank Sinatra singing New York, New York is amazing! Last time was a little fancier with the lead outrider asking his pony to do a Spanish walk, but this was still great.


After what felt like another hour the horses were finally loading into the gate. And then they were off! I panicked a little at the start. The announcer said that American Pharoah broke badly. Since we were watching the horses from the back, it was tough to see who was in the lead. I knew that if American Pharoah didn't make the lead before the first turn, his chances of winning would dramatically decrease.

Midway through the turn I was able to confirm that American Pharoah was in the lead. The excitement only built from there. He was setting reasonable fractions each quarter. Good. He was not fighting his jockey. Good. He looked happy! Good!

Everyone had been on their feet since the post parade. But at the half mile point, everyone started yelling, screaming, and jumping. They did not stop until well after the race was over.

There was a moment at the top of the stretch where it looked like American Pharoah might face a challenger. Everyone had the same thought: "oh no, another year without a Triple Crown winner." But that thought only lasted for about a second as American Pharoah began to pull away. His win was so easy. It didn't look like the fastest final quarter in Belmont Stakes history. It looked like an easy morning gallop. 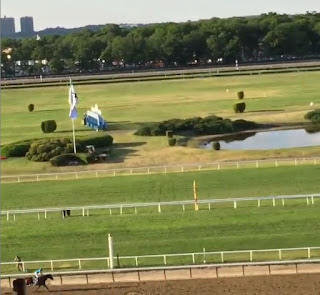 The feeling of pure shock that we all felt as we watched him stride toward the finish line was amazing. Is this really happening? Are we really witnessing a Triple Crown? Many in the crowd were not around when Affirmed last won it in 1978. Others were witnessing the event for the second or third time. Either way, it was incredible.


The pure joy that Victor Espinoza experienced as he won was shared by everyone in attendance. It was great to see him receive high fives from other jockeys and a hug from the outrider who caught up to him. Nobody cared that the other horses lost. Everyone was excited that this horse did it!

A few people left early to beat the crowds, but most of us hung around in the stands. Nobody wanted the moment to be over. We hung around to watch the sunset and soak in the last moments of an incredible day. 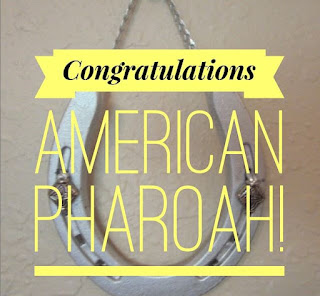 Email ThisBlogThis!Share to TwitterShare to FacebookShare to Pinterest
Labels: about us, horse racing

What's New in Our Etsy Shop